T.R. Miller, Leeds fans will sit on same side for playoff game

But when the Tigers make their second trip up north, their fans will be sitting in close quarters with fans of the opposing team: The stadium at which the Tigers will be playing has no visitors bleachers. 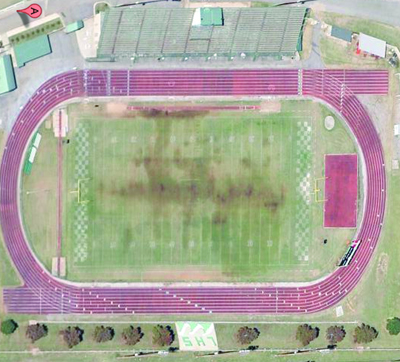 While the stadium has no visitors bleachers, Tiger fans will be joining Leeds fans on the home side bleachers — bleachers that are said to be split 50/50 Friday night.

“They only have bleachers on one side,” Tiger head coach Jamie Riggs said, who said he believes the bleachers may be marked in some way to separate the fans.

Ron Ingram of the Alabama High School Athletic Association said although there are no visitors bleachers, the stadium meets requirements to host playoff games.

“Leeds has a big stadium but no formal bleachers on the visitors side,” Ingram said. “It has hosted numerous playoff games in the past, and to my knowledge has had no complaints. Several schools have bleachers only on one side. Mountain Brook, Hewitt-Trussville and Clay-Chalkville had that situation for many years. Stadium criteria requires a 3A school have enough seating for at least 2,250. They meet all requirements.”

Here is the stadium criteria listed in the AHSAA Fall Book:

• Each school hosting a playoff game must provide a facility that meets the minimum standards. The minimum seating capacity for schools in each class are:

1. The field shall include coaches’ areas and team boxes and be marked as outlined in the National Federation Rules Book (Rule 1 – The Game, Field, Players and Equipment).

2. The barrier (wire fence) enclosing the field shall be at least five yards from the sideline and four feet high.

3. A secure area (ticket booth) for the sale of tickets must be provided outside the stadium.

4. Entrance gate(s) for receiving tickets and a pass gate must be provided.

5. The stadium (seating areas and playing field) must be totally enclosed so fans must use the gate(s) to gain entrance to the stadium.

6. Dressing rooms with hot and cold showers for both teams must be provided.

7. An officials’ dressing room with hot and cold showers must be provided.

“We have never had complaints to my knowledge except that Leeds has won most of the time,” Ingram said. “They have been to the quarterfinals, semifinals or finals each of the last eight years—much like T.R. Miller.”

Game time is set for 7 p.m. in Leeds. The stadium is located at Leeds Middle School located at 1771 Whitmire Street.

Here are the directions to the school as mapped by Google maps:

• Merge onto I-65 North toward Montgomery and take the Interstate for 157 miles.

• Turn left onto Whitmire Street. Destination will be on the left