One road closed in Escambia County, but travel not recommended 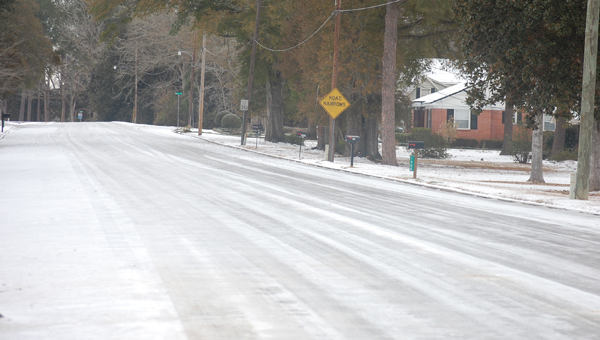 Belleville Avenue appears to be a sheet of ice Wednesday morning.

The overpass on U.S. 29 into Flomaton is closed, Adams said.

Most people appeared to be heeding warnings to stay off the roads on Wednesday.

“We don’t have as many reported ‘in the ditches’ today as we did yesterday,” Adams said. “We do have some die-hards that have been on the roads.”

While roads are not closed, “I have not heard any reported pavement that was clear,” Adams said. “Everything I drove on was all ice.”

While Adams said some drivers do have to get to work, he praised area agencies for bringing staff in early to keep as many people off the roads as possible.

Some roads also have patches of black ice, that appear to be clear pavement but are treacherous.

Adams said Thursday morning will likely be just as bad.

“We may get a degree or two above freezing today, but only for an hour or so,” he said.

With temperatures dipping as low as the teens tonight, that will mean anything that thaws will refreeze.

Adams praised the Brewton and Escambia County school districts for making the decision to cancel school Tuesday and Wednesday. No decision on Thursday classes had been made as of 10:30 a.m. Wednesday.

In Birmingham, where only a dusting of snow had been predicted, an unexpected two inches of snow that froze on the roads paralyzed the city. Motorists were left stranded in many places, and some students spent the night at their schools with teachers and administrators.

Jefferson Davis Community College Warhawk head baseball coach Darrell Blevins and his Warhawks will take to the diamond for their... read more