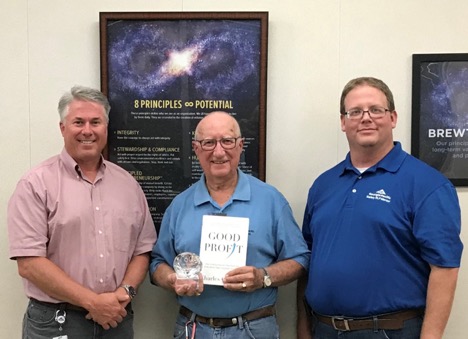 A reception was recently held at Georgia-Pacific’s Brewton mill to honor Glen Freeman and his 60 years
of service to the facility. Freeman’s first day at the mill was June 24, 1959, and of the more than 30,000
Georgia-Pacific employees worldwide, he holds the record as the longest serving associate.
During the celebration, Freeman was presented with an etched glass diamond award and a signed copy
of “Good Profit,” written by the company’s owner Charles Koch. The book included a personal note of
congratulations to Freeman for his contributions and dedicated service. He was also presented with a
photo album highlighting a recent celebratory trip to Atlanta, compliments of Georgia-Pacific’s
corporate headquarters.
Jeff Joyce, vice president and mill general manager, said it has been a pleasure working with Glen over
the years. “Glen demonstrates a positive outlook for the potential of our facility and has been a genuine
advocate for the Brewton mill team.”
During his recent Atlanta trip, Freeman and his wife of 51 years, Ann, stayed downtown at the Ritz-
Carlton, visited with corporate executives at the top of the Westin, where they had a 360-degree view of
the city. They also received a behind the scenes tour of the Georgia Aquarium, tickets to the National
Center for Civil and Human Rights, Atlanta Braves baseball tickets and a trip to the College Football Hall
of Fame.
“Ann and I had the time of our lives,” he said.
Freeman spends his time at the mill on safety-related projects and assignments, including new
employee safety orientation.
“I’m trying to be a mentor to the younger employees, especially about safety,” he said.
When asked why he has continued to work at the mill for so long, Freeman simply smiled and said, “I’m
not finished yet. I still have work to do.”

With the Fourth of July being tomorrow, the radio will play more patriotic music and thoughts will turn to celebrating... read more