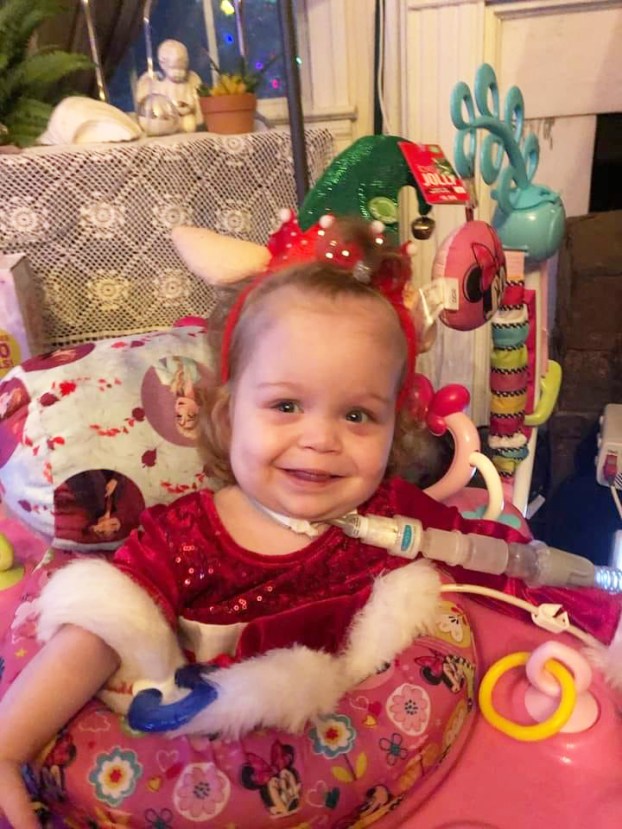 Home for the holidays: Byrd spends first Christmas at home

Raider Rayne Byrd spent her first Christmas at home this past holiday season after spending the first 462 of her life in the Neonatal Intensive Care Unit at Studer Family Children’s Hospital at Ascension Sacred Heart in Pensacola, Fla.

Born two months ahead of schedule, Raider weighed in a 2 lbs. 6 ounces and was less than 14 inches long at birth. Since September 3, 2019 when she was born, she has endured seven surgeries and numerous procedures to get her to where she is today.

Kenny Holt, one of Raider’s grandfathers, said she is happy and is doing well.

“She has had some rare occurances in her life,” Holt said. “She still has a breathing tube, but we are hopeful that maybe that will come out soon. She is doing well.”

Holt said that Raider will still have some hurdles to jump as she continues to improve and grow every day.

“She had pulimnary hypertension,” Holt said. “But that has gone away. She still has a gastric feeding tube and we are hoping to see that taken out soon as well.”

Raider progressed after surgeries, complications and procedures dramatically, allowing for her discharge from the Pensacola, Fla., hospital on Dec. 8, 2020 after spending nearly 15 months in the NICU there.

“Raider graduated from the NICU and was discharged,” the post said. “She’s home! Discharged at 20 lbs. and 28.346 inches long. This Tiny Superheroes Champion is thriving.”

In a diary Holt has kept since Raider’s birth, her progress and treatments have chronicled.

On Sept. 20, 2019, Holt wrote about Raiders first full week of life: “Born with holes in her heart between the two lower chambers (Ventricular Septal Defect – VSD) and exterior to the heart on blood lines Patent Ductus Arteriosus (PDA)! We knew she had the holes in her heart before she was born. So tiny! She would hold our fingers and our hands looked so big compared! Her diapers, folded like it would be on her body, fit into the palm of our hands! Great Grand Nana GiGi, Judy Sizemore, was in Kentucky when Raider was born and came back shortly afterward. She got to visit with her and see her for the first time.”

Throughout her stay in the Pensacola hospital, Raider experienced highs and lows in her healthcare and growth.

In February of 2020, Raider experienced several issues as chronicled in Holt’s diary: “Day 159  2.09.2020 3 days since tracheostomy. She has ‘clamped down’ internally on her airway several times in the last two days when she was agitated, stopped breathing, turned purple, and was “bagged” through her trach (had air forced in). She is currently resting and is peaceful. We can see her, but aren’t supposed to touch her so as not to upset/irritate her. One of the stitches holding the trach in place has torn away and she has a minor sore where it ripped her skin. She is in a MUCH bigger bed since surgery! Still has lots of fluid retention! Still has pulmonary hypertension, enlarged heart, holes interior and exterior to her heart (both are shrinking in size), abdominal incision is healing well, stomach is still distended. Keeping her sedated.   7pm 2.09.2020 Raider just had to be bagged again! Took two minutes to bring her back! 10pm * Raider had to be bagged multiple times again today and this evening! Took two minutes to bring her back on the last one at 7pm! We have been asked not to rub or stroke her, but we can offer a finger….if she wants to grab, she can. I was talking and she opened her eyes, tried to find me, and when I put my finger next to her hand, she grabbed it and held tightly for nearly an hour! With her other hand, she grabbed Nana GiGii’s finger and held it for a while and then held Nurse Nicole’s finger for a time. She’s had a rough day, but is resting tonight. She had her eyes open for a lot of our visit! Was told it was the first time today that she was awake and calm!”

As she grew and improved, medical staff at the hospital prepared Raider for her transition to home. Following 462 days of ups and downs, family members were finally allowed to bring baby Raider home – just in time for the holidays.

Vaccines for COVID-19 begin in Brewton

Vaccinations against COVID-19 are underway in Brewton at D.W. McMillan Memorial Hospital, but the general public will have to wait... read more