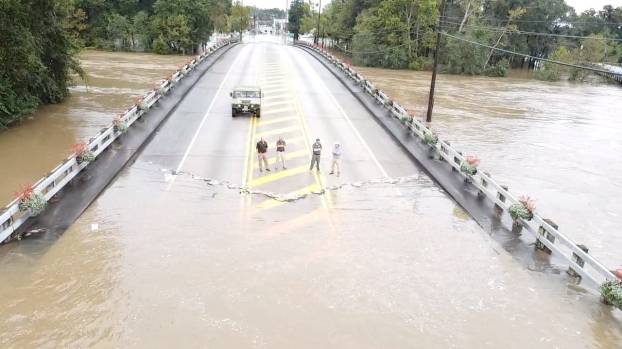 Sheriff Heath Jackson and other deputies survey the flooding this morning at Murder Creek.

The sunshine on Wednesday morning in Brewton and East Brewton may be giving a false sense of normality, but road barricades, ponding water and a forecast for more rain would indicate otherwise.
The Murder Creek Bridge that separates Brewton and East Brewton is closed and will likely remain that way for at least another day.
According to East Brewton Police Chief Kenny Brazile, the bridge was closed just after midnight on Tuesday night/Wednesday morning.
“The water was rising fast,” Brazile said. “We did let a few 18-wheelers through but we couldn’t take a chance on letting other vehicles through after about 12:30 or 1 a.m. It was at that point that we made the decision to close the bridge.”
Brazile said the flooding in East Brewton happened quickly and will likely be an issue until other waterways reach their crests.
“The forecast right now is that the river (Conecuh River in Riverview) won’t crest until either sometime Friday or maybe Saturday,” Brazile said. “We won’t really see much of Murder Creek going down until that crest happens and the water begins to recede. We’ve got more rain coming today (Wednesday). The water is continually rising right now. We are going to have some issues for the next few days.”
Brazile said other parts of the area east and northeast of the city are experiencing major roadway issues as well.
“The state (Alabama Department of Transportation) has closed Hwy. 29 from Andrew Jackson Street almost all the way to Andalusia,” Brazile said. “There are at least four major washouts along that route. People will need to find another way of travel if they use Hwy. 29 regularly.”
Brazile said his department is advising those looking for a way around Murder Creek to use either of the following routes: U.S. 41 to Berrydale and on to Baker, Fla., to Andalusia where access to I-65 is available; or U.S. 41 to Jay Road into Jay and Century, Fla., into Flomaton and on to Hwy. 113 to reach the interstate in either direction.
Brazile also took the opportunity to remind drivers to obey road blocks and barricades when traveling in the county.
“Those barricades are there for a reason,” Brazile said.. “I saw an area last night (Tuesday) where the asphalt looked perfectly fine, but the entire area underneath was completely washed away. It’s unsafe to drive over those areas that have been blocked or barricaded. Even though there may not be any standing water, the road could be washed away from underneath the asphalt.”
Areas in the Damascus and Boykin communities along a stretch of Hwy. 29 remain impassable as well.
You Might Like

County ICU beds at or near capacity

Reports are floating around the state that most, if not all, ICU beds at hospitals in Alabama are full. According... read more